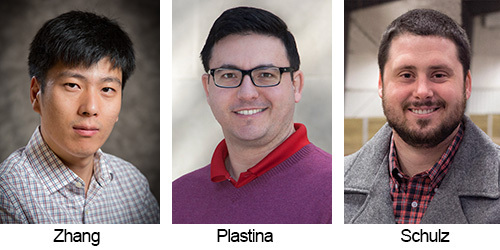 Chad Hart, professor and extension economist—who won the award in 2014—is proud of what the extension staff has accomplished.

“Iowa State extension has a very strong history, especially in economics. A lot is expected from faculty members that take on that role. These young men dove right in and made it their own and are recognized for the work that they’re doing,” said Hart.

“When the focus became trade disputes between the U.S. and China, Wendong Zhang became a very critical voice out there, being able to get perspective from both countries,” said Hart. “So that has grown to be a major part of his appointment. It wasn’t originally why we hired Wendong. He was hired to be a land value economist, and here he is talking trade. It just highlights the versatility that he has within his economic training.”

“Plastina’s work focuses on general farm management with an eye specifically toward conservation practices and how those affect not only the farms’ productive capacity but also their economic capacity. His work is being recognized and picked up nationally, and has earlier this year earned him being named the first Farm Foundation Agricultural Economics Fellow,” Hart said.

“Lee Schulz was hired as extension livestock economist in 2012, and immediately became the nation’s hog expert. He has developed into the nation-wide expert when it comes to the livestock industry, specifically pork, but also dealing with beef and all the others.”

Hart says that though these three are covering vastly different topics, they’ve all reached a national status and are seen as respected experts on those topics, not only within academia, but also to the general public.

“And that, from an extension point of view, is probably the most important, that they’re seen as people who can translate not only economic research but also economic story lines that impact world economies. And they can bring those to a level where the general person in the public can understand,” he said.

Extension is in essence a two-way street. Over time it’s adjusted, not only delivering information to farmers, but also gathering information from farmers. A big part of the job is collecting that information from farmers and figuring out the economic pinch points and challenges, the things needing study in research to help continue to foster economic growth within Iowa’s farming communities. These economists are not just doing what their predecessors did, they are continuing to push the boundaries in their research and the ways they work, such as online meetings, direct media contact, and events like Zhang’s Land Value Survey press conferences.

“Them winning the award is not just because they’re here at Iowa State, it’s because of the growth that they have created within their positions, even within an institution like Iowa State, which has a long legacy of economic extension,” said Hart.