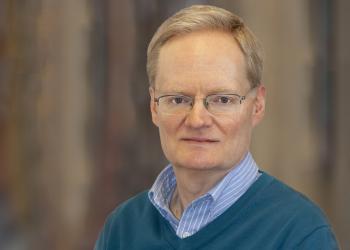 Department alumnus and Group Vice President and Deputy Director of Research of the Federal Reserve Bank, St. Louis, David C. Wheelock (’82 economics), spoke to members of the Economics Club at a meeting on Wednesday, November 13.

After David received his bachelor’s degree in economics in 1982, he went on to get a master’s and Ph.D. in economics from the University of Illinois in 1984 and 1987.

“My first job was as an assistant professor at the University of Texas, teaching at the economics department there.  I was there for four years, before going to St. Louis. I was hired as a visiting scholar at the St. Louis Federal Reserve Bank in 1991. Eventually, (in 1993) they made me an offer that was too good to refuse, and I’ve been there ever since.”

Along with his areas of interest in U.S. monetary history and policy, and performance and regulation of commercial banks, Wheelock has authored many books and articles on the establishment and history of the Federal Reserve Bank and its monetary policy. 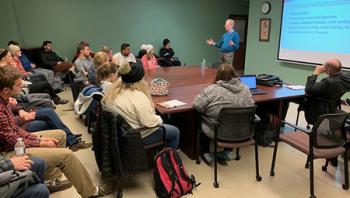 “In addition to opportunities for research assistants, you could go on the bank examiner track. Or if your skills are such, we have a lot of opportunities for programmers, web developers, and data analysts of various stripes.”

“Most of our research assistants come with the idea that they are seriously thinking about going to graduate school, but want to get some work experience first. So they’ll come work for us for a couple of years. About a third of them will go on to Ph.D. programs in economics.”