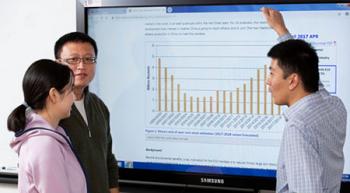 The Center for China-US Agricultural Economics and Policy in CARD was the subject of a recent Grant Wall article in CALS STORIES magazine:

A new center at Iowa State University is working to advance knowledge of China’s trade policy and agricultural markets.

The Center for China-US Agricultural Economics and Policy was created in April 2017 by the Center for Agricultural and Rural Development at Iowa State. The center has forged a partnership with the Chinese Academy of Agricultural Sciences and Iowa State experts to get access to information about Chinese agriculture and to clear the path for Chinese students to study economics in the United States.

“Until this partnership started, we didn’t have access to good data that existed in China,” says Dermot Hayes, Charles F. Curtiss Distinguished Professor in Agriculture and Life Sciences and former interim director of the center. “Their public data for years has had quality problems, but now we have access to better data and to people who understand the agricultural industry in China.”

The partnership is already starting to pay dividends.

“China is so big that the things they do domestically, let alone who they decide to buy from internationally, have strong implications for what producers in the U.S. are able to sell,” says Zhang. “Those are things we care about very much.”

The partnership also is beneficial to Chinese scholars by providing them a place to come and work. The center hosts researchers and doctoral students who conduct research of their own.

“Typically, these students would come to the U.S. and study our agricultural economy, but now they are able to come over and study Chinese agriculture,” Hayes says. “They are able to help analyze the data and provide better context, which has helped us learn a tremendous amount.”

Knowledge of the inner workings of the Chinese economy can help U.S. farmers and economists spot emerging markets or other trade opportunities.

“China has produced 97 percent of the pork they consume internally, meaning they only import 3 percent from Europe or the U.S.,” says Zhang. “But there has been an outbreak of African swine flu in the country, so imagine if their imports now increase from 3 to 5 percent? That is a very large market for producers in the U.S. This is interesting to us because China is no longer a developing country that needs technology and infrastructure as it was 20-30 years ago. They are now a country whose domestic decisions have real consequences internationally.”