What does the demographics of the future workforce for Iowa and the U.S. look like?

Can you tell me, please, what the projections are for the U.S. and State of Iowa work forces? What is the likely composition of those work forces, and where/how would we be smart to recruit in order to build the strongest pool of workers over the coming years?

The U.S. Bureau of Labor Statistics has an annual projection of employment and labor force growth.  The most recent is Employment Projections: 2018-2028, available at https://www.bls.gov/news.release/ecopro.nr0.htm

The share of the population engaged in work is expected to decline as the baby boom ages and is replaced by smaller cohorts of younger labor market entrants.  Cuts in legal migration are also limiting labor supply.  Businesses are pressing for increases in legal migration that would raise the labor supply and employment growth.

It is harder to project the Iowa labor force as we have free migration across state borders.  U.S> Census projects population growth by state. Between 2010 and 2014, Iowa’s population is expected to grow by 11.4%, about half the U.S. average.  In contrast with our neighbors, employment is expected to grow 28% in South Dakota, 20% in Minnesota and Nebraska, 6% in Missouri, 5% in Wisconsin, and -3% in Illinois.  You can find the state-by-state population projections here. https://demographics.coopercenter.org/national-population-projections

Cross state migration is driven by relative job growth, and to a lesser extent, by amenities and government fiscal policies.  If Iowa wants to increase its population, it would need to encourage migration from other states or to increase our share of immigrants.  Absent job growth, that will not succeed, and so you would want to start with policies that encourage job growth.  However, government efforts to subsidize new firm entry or to target individual industries have generally been unsuccessful. South Dakota’s strategy of providing a favorable business climate might be a possibility, presuming that their faster population growth is not driven by improving amenities. 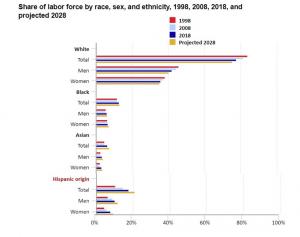