Marginally Attached workers- How do we get them back in the workforce?

Much of our labor data and statistics explain what a marginally attached worker is, how the pandemic exacerbated the numbers to an all time high. I work in workforce development and want to target this population. How would you suggest I go about this? I am not even sure how to identify/locate them.

The sudden and persistent drop in labor force participation that began with the pandemic has been called the Great Resignation. The labor force fell by 3.2 percentage points at the beginning of the pandemic (Figure 1), but almost immediately began to rebound. By 2022, the labor force participation rate had stabilized about 1.1% below its pre-pandemic level. Incorporating the population growth since February 2020, the loss in labor force corresponds to 3.5 million fewer people who have made themselves available for work. 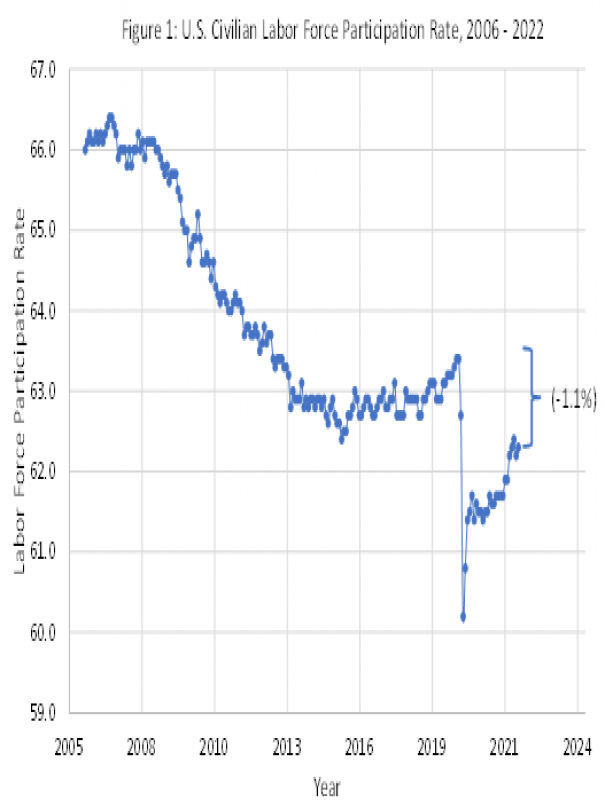 The drop in labor force participation has occurred for both men and women and at all ages. As can be seen in Table 1, the largest decrease in labor force participation was by young men. The smallest decrease was for older women. Surprisingly, 1.1% of men between the ages of 45-54 dropped out of the labor market, even though their earnings are at the highest level of their work careers at those ages.

To show the challenges faced by employer’s who are trying to hire workers, we can compare the data on job openings, hires, quits, and layoffs from before the pandemic to the most recently available monthly data. 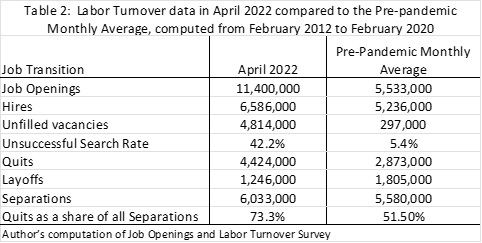 In a normal recovery, such a strong labor market would have caused a surge of workers back to the labor market. The 3.5 million fewer people in the labor force mentioned above would have gone a long way to filling the 4.8 million unfilled vacancies in April 2022.

So why are people not responding? One past reason cited was the lack of day care and school closings, but parents atypically stayed in the labor market during the pandemic. The drop in labor force participation was atypically small for young women in Table 1.  The resumption of schooling should have rendered that issue moot. The disincentives to work due to the unusually generous unemployment benefits and the additional tax credits and transfers ended by June of 2020 and should no longer be suppressing the desire to work.

Barrero, Bloom and Davis (2022) have been sampling persons who worked in 2019 to assess their labor market plans post covid-19. About 13% say they will not return to the labor market, a percentage that has not changed, even as the incidence of the disease has subsided and the economy has reopened. The groups most likely to say they do not intend to reengage with the labor market are older, less-educated, and female. Only 10% of those who dropped out of the labor market list covid-19 as a primary reason, and less than a quarter list covid-19 as either a primary or a secondary reason. In other words, 75% of the Great Resignation is not related to the pandemic.

Will they come back? It is hard to believe that the oldest labor force dropouts aged 55 or older will return. The strong growth in investment returns in 2021 strengthened pension incomes, although the bear market in the first half of 2022 plus rising cost of living may cause some to reassess. The youngest will almost surely return as they could not possibly have amassed sufficient resources to avoid working for the rest of their lives. It is the middle group that is the most curious, having dropped out during their peak earning years. One presumes that the fall is asset values and the rising cost of living will induce many to reenter the labor force, but they have not yet done so.