How can any president take credit for the number of jobs being filled?

My question is thus, If the U.S. has millions of jobs needing employees, how can any president take credit for the number of jobs being filled? i.e., Millions of unfilled jobs and people finally decided to fill those positions then obviously no president forced them to apply. So how can a president suddenly take credit for people deciding to rejoin the job market. Am I missing something here? The question is in reference to job growth vs millions already available jobs.

Additionally, when the job numbers are released, does it account for individuals working two jobs to make ends meet?

The more pressing question is whether they should take credit and the answer depends on whether policies that have been implemented by the politicians have improved the business climate sufficiently to increase demand for labor.  In the case of the current administration, the tax cuts and various efforts to remove regulations imposed by the previous administration have improved incentives to invest.  Real wages have risen, and that induces more individuals to enter the labor market.  The very low unemployment rate also signals a less lengthy search for jobs and that also induces more people to enter the labor market.  So to the extent that the improving labor demand conditions are in response to those policies, it is also legitimate for the president to claim credit.

On the horizon are potential deteriorating labor demand conditions related to the various tariff policies being imposed, and should that slow or reverse the positive economic conditions, the president should be legitimately blamed for that.

The Bureau of labor statistics counts individuals as employed if they hold at least one job.  They also count jobs, which means that individuals who moonlight would be counted as many times as they have jobs.  The rate of moonlighting has declined over time for all education groups with the least educated also least likely to hold multiple jobs.  That is consistent with information on hours of work that has shown steady decreases in hours worked by the least educated while hours of work for college graduates have been steady or rising since the 1960s. 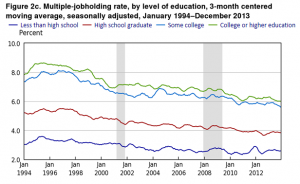