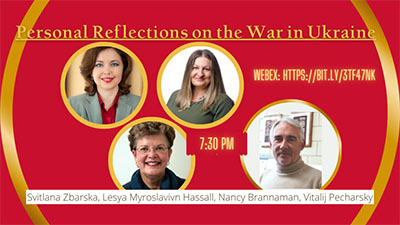 Nancy B. Brannaman (BS Ag Business/Farm Operation, MS Ag Economics/Finance) was one of the panelists at a virtual University Lectures event, Personal Reflections on the War in Ukraine, March 23.  Brannaman was with the  former U.S. Department of State Foreign Service in the Consular Officer in Kyiv around the time of Ukrainian independence.

The war on Ukraine has brought suffering and death to its people. The whole world has watched as Russia attacks infrastructure, civilians, and nuclear power plants. Russia is growing increasingly isolated as financial institutions, businesses, and cultural entities cut ties with the country. The possibility of nuclear war and the effects on the world economy have shaken many. This panel will focus on the impacts the war is having on Ukranian-Americans and those who have worked in Russia.

Brannaman was joined by Dr. Lesya Hassall, who graduated from one of the Ukrainian oldest and most prestigious universities Nizhyn Gogol State University, with a Master’s degree in teaching English and German as second languages, Dr. Svitlana Zbarska, who manages programs that promote research opportunities for undergraduate students across Iowa State University campus, and Dr. Vitalij Pecharsky, who was born in Lviv, Ukraine. In 1976, he graduated with a BS/MS degree in Chemistry from the University of Lviv (presently Ivan Franko National University of Lviv)  – one of the oldest institutions of higher learning in Ukraine dating back to 1661.