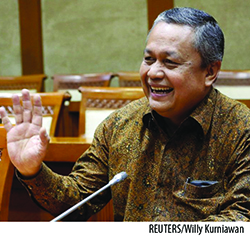 Perry Warjiyo ('91 Ph.D. econ), a Bank Indonesia deputy governor since 2013, was endorsed March 28, 2018, by the Indonesian parliament's financial commission to be central bank governor, succeeding Agus Martowardojo. Warjiyo was President Joko Widodo’s sole nominee for the role. Warjiyo's more than three decade career at Bank Indonesia began in 1984. Prior to his role as deputy governor, he served as Executive Director of the Department of Economic Research and Monetary Policy since 2009.

Born in Java, he graduated from Gadjah Mada University in Yogyakarta in 1982. Later he studied monetary policies and international finance at Iowa State University. Warjiyo was a Ph.D. student in the economics department from 1986-1991, writing his dissertation “Resource Adjustment, Dynamic Price Responses, and Research Impacts in U.S. Agriculture, 1950-1982” before graduating in 1991.

He became a lecturer in the University of Indonesia in monetary economics and international economic finance, as well as a guest lecturer in several universities in Indonesia, writing and publishing numerous books, journal articles, and paper in economic, monetary, and international issues. Starting in 2007, he served two years as Executive Director of the International Monetary Fund, representing 13 member countries of the South-East Asia Voting Group.

Read the US News story.