Students desperately searched for a place to sit as the audience in the Sun Room of the Memorial Union stretched all the way back to the South Ballroom.

For James Shortle and Sandy Hoffmann, distinguished Iowa State alumni, this was a college reunion.

The two of them came back to Iowa State Monday night and informed the audience of water quality and environmental health issues. They also spoke about how policies have developed to accommodate them.

Shortle, distinguished professor of agricultural and environmental economics at Pennsylvania State University, received his Ph. D. in economics from Iowa State in 1981.

"This is where I was introduced to water quality," Shortle said.

Over the past 35 years, Shortle has done work related to sediments running off into water — specifically in the Chesapeake Bay area.

In the United States and many other developing countries, agriculture is the leading cause of runoff pollution in water resources, according to Shortle's PowerPoint presentation.

A picture of the Chesapeake Bay was projected on the screen. A florescent green color was surrounded by a sliver of blue to represent the presence of algal blooms in aquatic ecosystems. While they aren't direct threats to humans, algal blooms will increase and threaten the overall function of aquatic ecosystems, Shortle said. 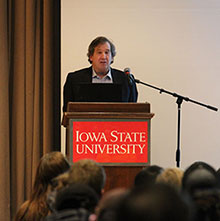 Nitrogen is the pollutant that causes the most environmental problems, according to Shortle's presentation. Because it’s water soluble, Nitrogen will move with the water as it travels. Runoff from farms in Iowa travel all the way to the Gulf of Mexico.

Ian Langsev, freshman in environmental science, was in attendance expecting the lecture to be more focused on economics.

“I’ve always been interested in working within a government committee, because I’d be able to see my work influence and help others," Langsey said.

Hoffmann, senior economist in the U.S. Department of Agriculture’s Economic Research Service, received her undergraduate degree from Iowa State around the same time as Shortle.

Her focus is on assessing human health benefits from environmental quality and food safety programs.

Of all the spinach production in the United States, she said, 98 percent comes from four states along the West Coast. Since 1995, sales in fresh spinach have grown. But in 2006, an E. coli outbreak was tied to bags of fresh spinach, taking three lives.

Hoffmann explained that this outbreak occurred in a single field due to a lack of biodiversity. This only added pressures to improve farming practices. Things such as the importance of wildlife in fields and quality of irrigation water were all being implemented.

States put it on their shoulders to regulate and eventually got it to a congressional level with the Food Safety Modernization Act of 2011. 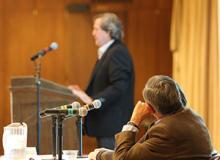 Nina Whitney, Ph. D. student in geology, was encouraged by Sandy’s example that there have been issues that were solved from a nongovernment perspective.

“I think that part of the problem is who’s responsible,” Whitney said. “It’s hard to say farmers are responsible because they’re growing all of our food, but of course you do need to target them because that’s where it’s coming from. I think this is the whole debate were having in Iowa right now with the Des Moines Waterworks lawsuit.”

Part of the Economics Forum
Sponsors: Department of Economics and Committee on Lectures.